On the street, on the phone

People in or around Oxford Street, inseparable from their constant electronic companions. (There's always an exception of course....) 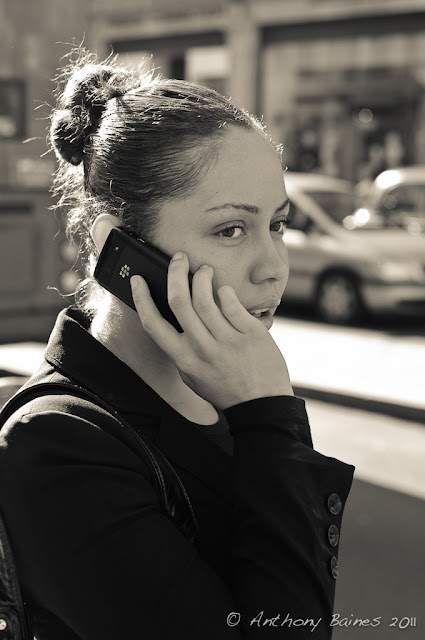 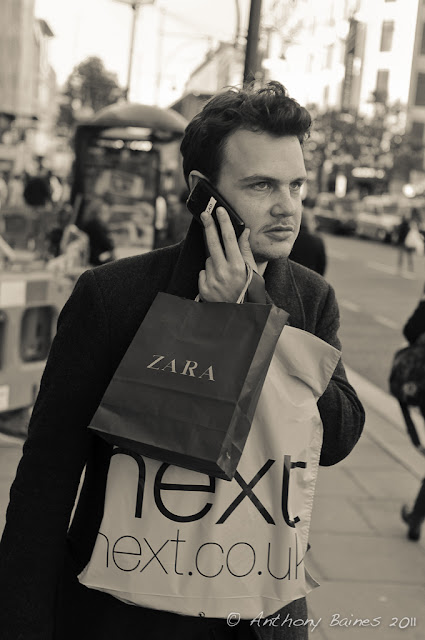 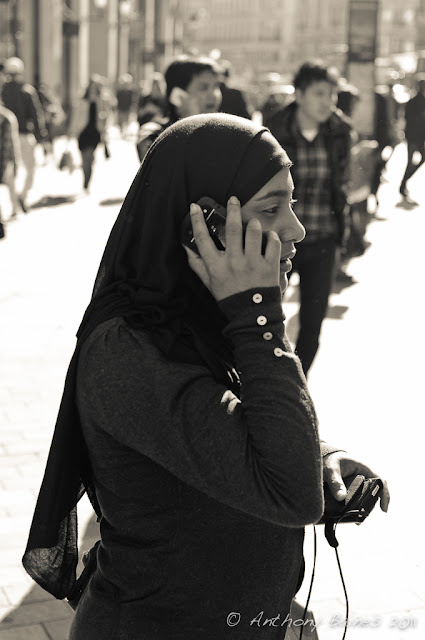 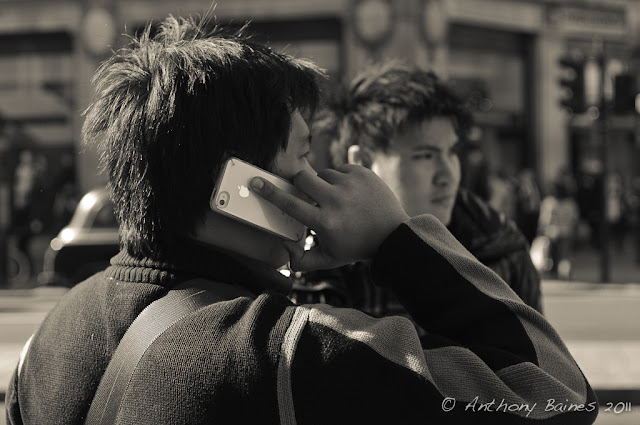 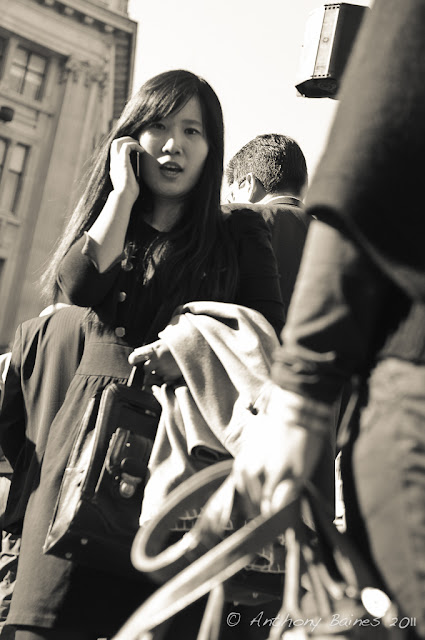 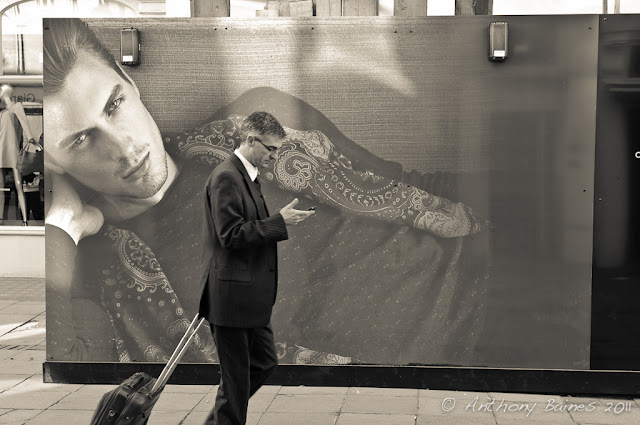 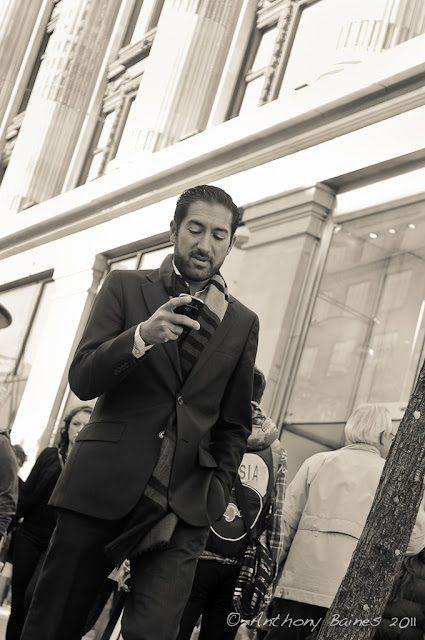 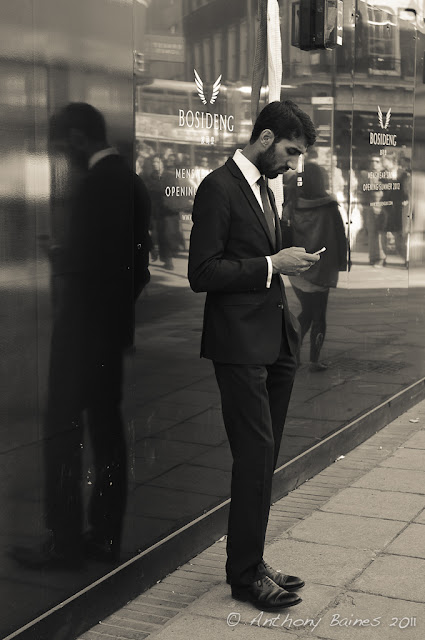 The exception: the photographer with his strictly non-electronic Leica M3 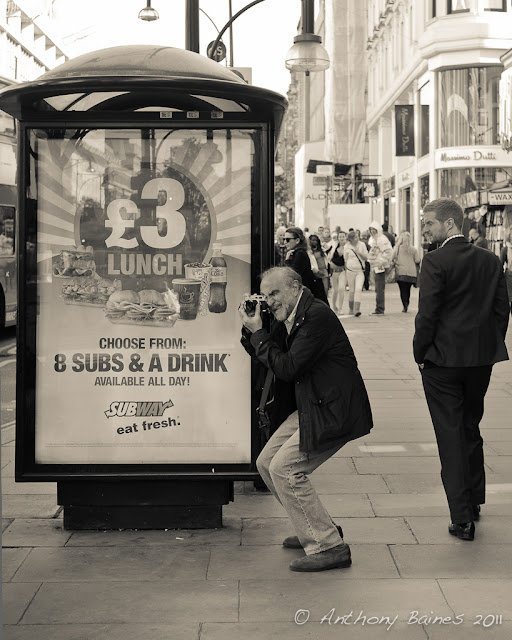 Email ThisBlogThis!Share to TwitterShare to FacebookShare to Pinterest
Labels: AJB, Monochrome, on the phone, On the street, street life

Margate - Light is everything

How many times have you heard a photographer say 'the light was really poor . . . ' as an excuse/reason for their images being flat or lifeless. It happens to us all!

There are however occasions when the light is perfect and then it's a case of making hay while the sun shines.

Philip and I went to Margate on September 30th to see the new exhibits at the Turner Contemporary. After our tour we grabbed a coffee and took some shots outside. The gallery building was resplendent, being bathed in the late afternoon light and there was no need to use a polariser to beef up the sky or to 'process to death in photoshop' - most satisfying!

As you can see from Anthony's post we were blessed with beautiful weather and great views of the seals.

Added below are a few more images from our day. Thanks to James and the crew at Dover Sea Safari for a memorable trip!


Last Saturday, 1 October, Wonky Horizons and spouses went on a “Sea Safari” from Dover to see a colony of seals that lives in Pegwell Bay near Sandwich. For an early Autumn day, the weather was staggeringly good – not a cloud in the sky and very warm at nearly 30°C. The beach in Dover was covered in families sunning themselves, and there were even swimmers out in the harbour.
The Dover sea safari took us in a high speed inflatable up the coast, about half an hour’s drive (I think that's the word) at about 30 knots over a flat calm sea: an extremely exhilarating ride.
Almost in the shadow of the huge cooling towers at Sandwich and not far from Ramsgate, on the small estuary of the River Stour lay the seals.
We were told they were the females of the colony – the males like to go off to the Goodwin Sands. There were not many there, less than 10. Earlier in the Summer, 84 had been counted. Although the colony may have dispersed to some extent since it peak, many others were probably off feeding – the tide was exceptionally high, to the point where they could not haul themselves fully out of the water. 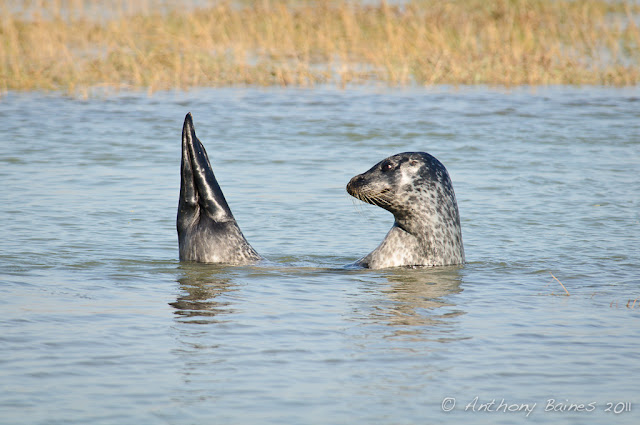 When we arrived, the skipper cut the engine, and we just drifted by, giving plenty of chance for some pictures. The seals seemed completely undisturbed – the estuary of the Stour is busy with boat traffic, and they seemed not to care about humans being around at all. Nevertheless, we did not get too close, so I needed to use 400mm on the D300 to get the pictures shown here. Martin had his 500mm with the 1DIV, which I’m sure was a better option still. 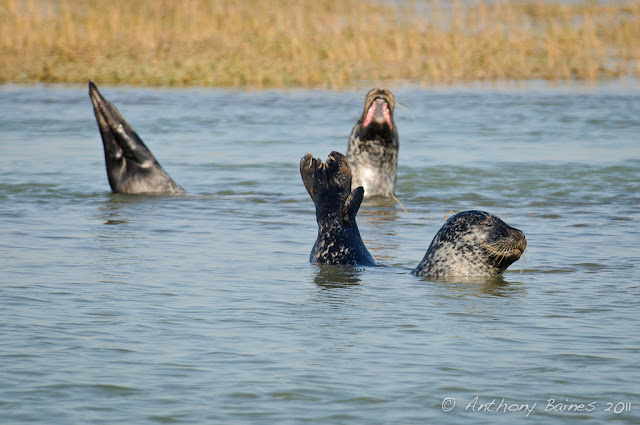 That area of the Kent coast is a wildlife reserve, with little human activity off the water. In those few minutes we saw a wonderful variety of birdlife, with some of the largest flocks of oystercatchers I’ve ever come across. Heron, egret, curlew, a couple of brent geese, several varieties of gulls, terns, cormorants and more, and all seen without needing binoculars. 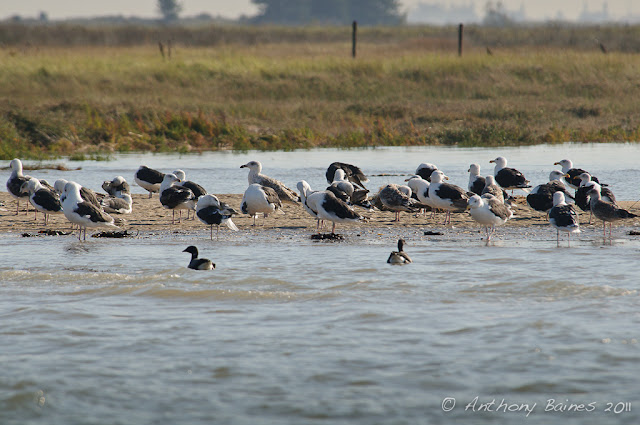 On the was back, the skipper pushed the throttles right forward: the sea was a little rougher, so, if the ride out had been exhilarating, banging through the waves on the way back was even better. It even prompted Phil to have a Titanic moment!
Back at Dover, we had just nice time to have a couple of pints in the early evening sunshine, with the air still warm. The perfect end to a wonderful experience.
Thanks Phil and Martin for organising it!
Posted by Anthony at 07:51 No comments:

At the end of September, my wife and I spent a week in Lancashire. We have driven through many times on our way to The Lakes and Scotland but never actually stayed there.

Our base was the week was Thurnham Hall which lies about five miles south of Lancaster. We did a walk every day, both in the local area and in the Yorkshire Dales that lie east of the M6, with Settle, Hawes and Ingleton within easy reach.

One of my goals during the week was to visit Leighton Moss RSPB reserve and, with it being only a 20 minute drive from us, we managed three visits during our stay.

One of the star species there is bearded tit and I never tire of seeing these fantastic birds even though there are a number of places nearby our home in Kent where they are resident. I did not manage any great photographs but one morning I got up early and caught a pair on the grit trays left out on the reserve. I shot some video on my 1D Mk IV / EF500 + 1.4x.


During the summer/breeding season, like many small birds, they feed almost exclusively on insects but, from mid-autumn to spring, their diet switches to seeds; in the case of bearded tit, reed seeds. To assist in the digestive process they ingest small quantities of grit to grind the seeds down.

Most RSPB reserves have a feeder station to attract (and of course provide food for) small birds. Leighton Moss is no exception and, in fact, it has the largest array of feeders I have ever seen! I spent some time photographing the small birds (including coal and marsh tit) although lighting conditions were not favourable as the feeders are under a large tree canopy.

I had worked out that the best time of the day would be mid to late afternoon so on our last visit set myself up behind the viewing screen at about 3pm. I found that the nearest feeder was about 12 feet away and my 500mm lens has a minimal focal distance of 13 feet, so I went back to the car and got a 25mm extension tube. Once fitted I could focus on the feeder and branch that suspended it. I had no intention of photographing the birds on the feeders - just on the nearby branches - but the birds rarely land on these, going straight onto the feeders before darting off with a seed!

After about 40 minutes I was aware of something flying past my left shoulder, shortly followed by the sight of a raptor hitting the nearest feeder and scattering the feeding birds to the trees. The invader was a male sparrowhawk which had attacked a greenfinch that was inside the cage of one of the squirrel-proof feeders.

I took a whole sequence of shots over the 90 second period that the bird was there. With the poor light levels I was getting shutter speeds of between 1/125th and 1/320th of a second with apertures from f/5 to f/6.3 at 800 ISO. Thanks to the wonders of image stabilisation technology, most were pin sharp.

The shots below are in chronological order.


Shortly after this shot, the sparrowhawk managed to fly off with its prey in its talons. Quite a spectacle and, although there was not very much light, the quality and the even background helped to make for some very strong images.