Last Saturday, 7 December, I went with Phil plus our friend Katrina and her son Oliver to the Rochester Dickens Festival. I had not been to one of these before, and it's quite a long time since I've been to Rochester in any case.

Rochester is closely associated with Charles Dickens: his house at Gad's Hill Place is near Rochester, and several buildings in Rochester and its vicinity appear in his books (perhaps most famously, the churchyard of St James, Cooling, is supposed to have inspired the setting for Pip encountering Magwitch at the beginning of Great Expectations).

The heritage business is huge in the UK at the moment – the Medway/Thames estuary area is Dickens country, just as the area around Haworth is Bronte country. So it's inevitable that there should be a Dickens Festival. I don't know what it is, but there seems to be a communicable urge doing the rounds in the UK at the moment that makes people dress up in period costumes as living history re-enactors. I went up to Biggin Hill a couple of weeks ago for an evening photoshoot at the Heritage Hangar, and, naturally, there were re-enactors posing with the Spitfires and Hurricanes. You almost cannot avoid re-enactors at any organized event, but, it really can add to the fun and atmosphere.

What I had not expected was the crowds! We got to the bottom of the High Street just before the parade was due to set off, and started taking some pictures of the characters. But it quickly became impossible to move around very freely with the density of both costumed characters and spectators, and once the parade started it was just a question of going with the flow and following along at a very slow walking pace. 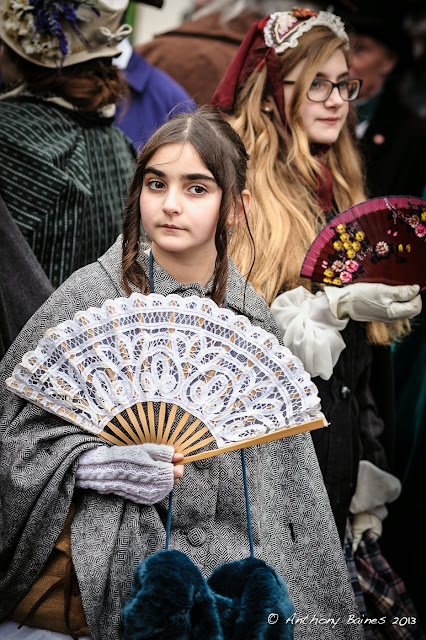 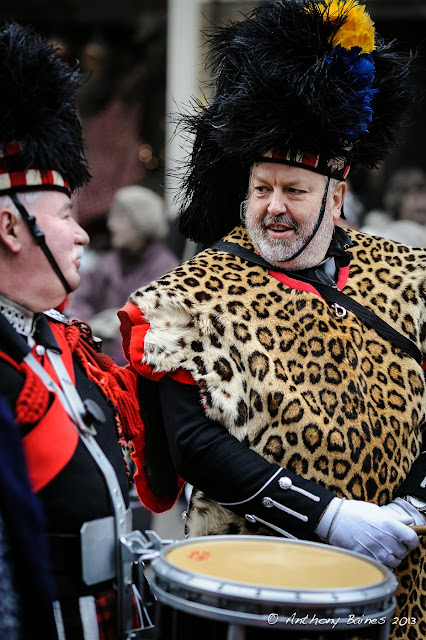 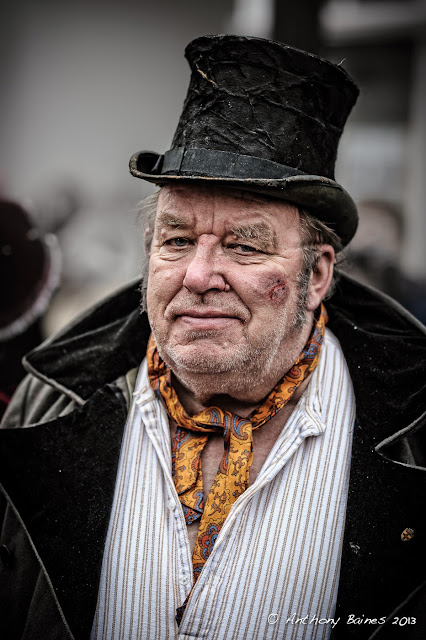 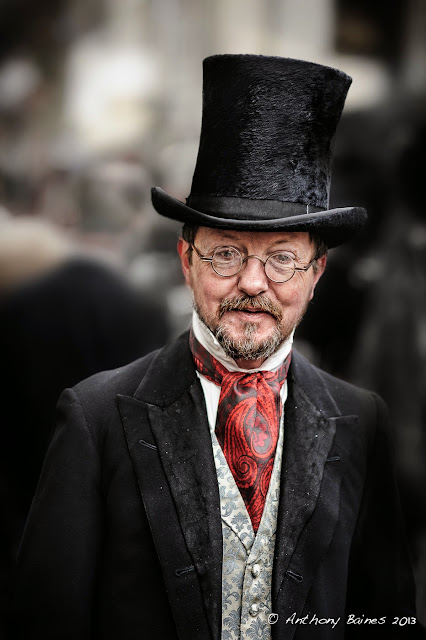 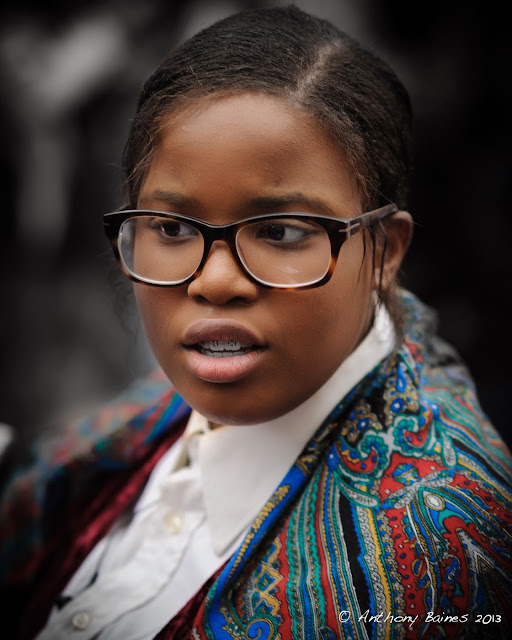 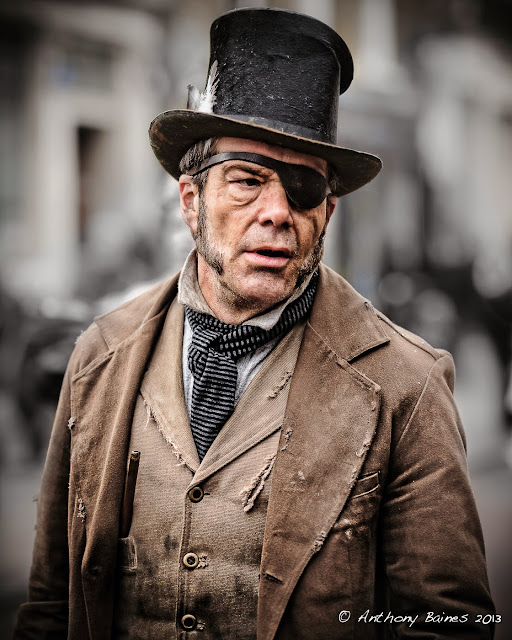 Never having been to such an event before, I wasn't quite sure what to take in the way of gear. I was hoping to get some good street shots with quirky characters in interesting framings or juxtapositions. So, I took a 35mm prime lens along with the D700, with the intention that that would be my main lens for the day. I thought I might be able to take the occasional opportunity to get close-up portrait of one or two people, so I also took a 105 mm lens with this in mind. However, the density of people was such that it pretty rapidly became impossible to frame individuals or even groups in a way that fitted with my original idea. The 105 became my lens for the day after about the first 5 minutes, with the aim of just picking out individuals and suppressing the busyness of the background. 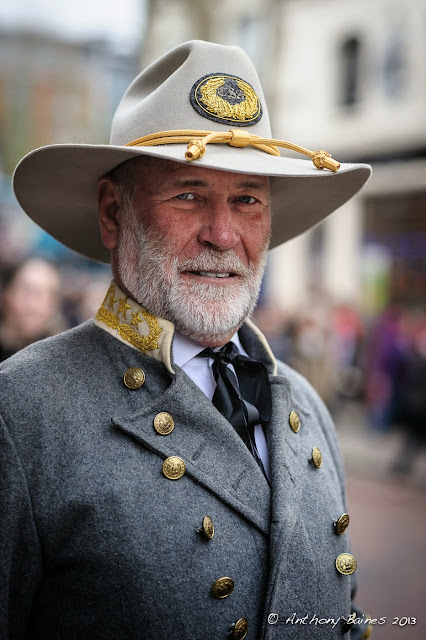 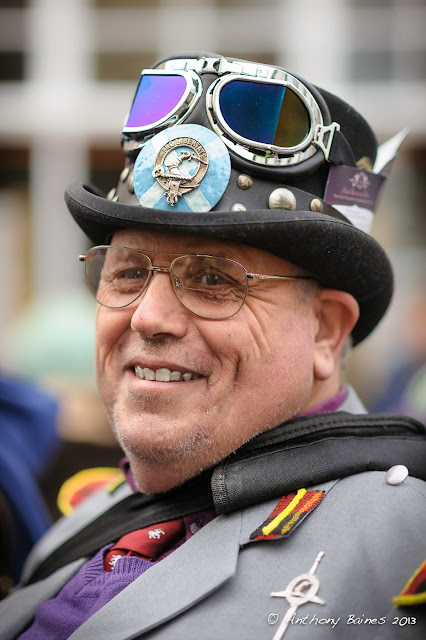 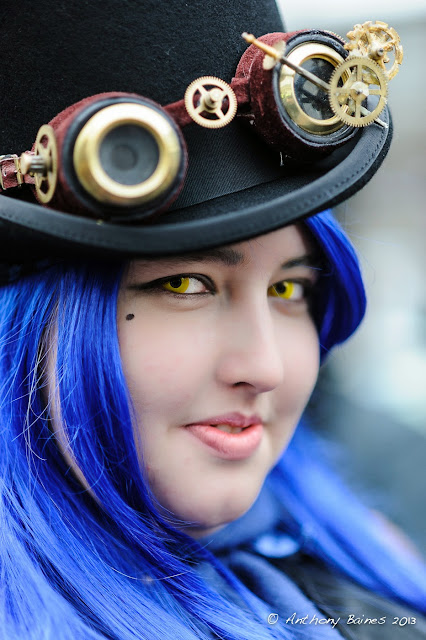 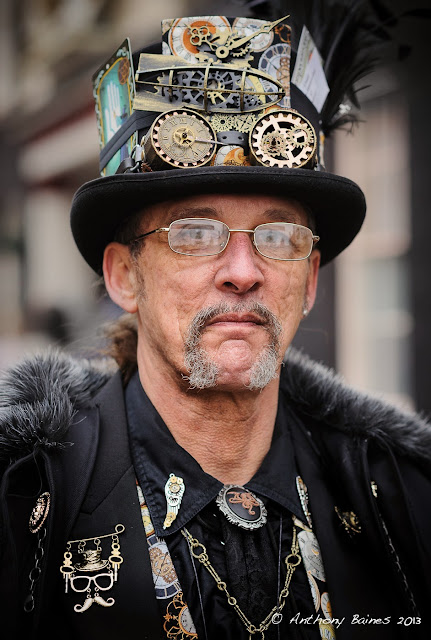 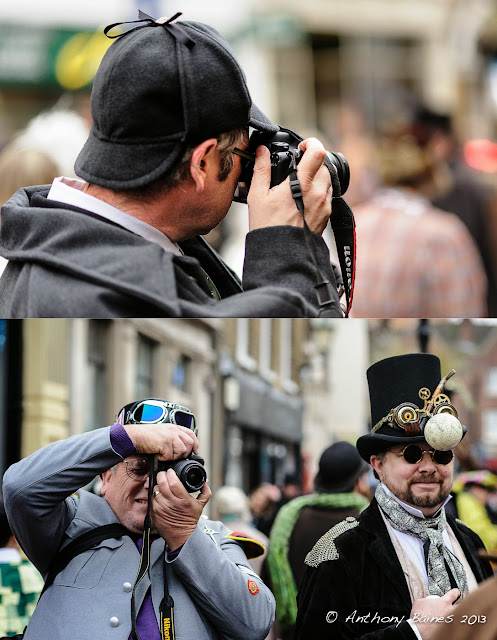 Anyhow, the four of us had a very entertaining day, and I got some pictures that I like. I had not expected just what a target-rich environment it turned out to be. The costumed characters were so happy to be photographed, and so cooperative it was a real pleasure. It was great fun that there were some anachronisms as well: I don't think Sherlock Holmes ever appears in a Dickens novel - much less with a camera :-) -  and I can’t quite work out what the Confederate general was doing in Victorian Britain either. The wonderful steam punks from Great Kentspectations  were out in force, although, somehow, I'm still not sure how they fit into the Dickens universe**.

After the parade, we were wondering where to go for lunch, and found a bunch of stalls out by the castle. Because there were so many people in Rochester, the cafes and restaurants were simply overflowing and, although dying for a coffee, we couldn't find anywhere with free space. However, the stalls by the castle were not completely overwhelmed, so we stopped by them for lunch.

The Taste of Thailand stall was there: they set up on our campus several times a week as well, so I am very familiar with their delicious green curries and Pad Thai; Phil, Katrina and myself chose Pad Thai, which had a suitably re-vivifying effect.

During the afternoon, it was a case of pottering around catching the occasional costumed character and generally soaking up the atmosphere. One of the things I loved was a French band of buskers called "Sur les Docks" - very energetic players and excellent musicians.

First time at a such a crowded festival – what did I learn photographically? Taking a fast portrait lens was really helpful – shooting wide open, or nearly-wide open, meant I could isolate characters against the background, even when it was really busy. I think I also need to be much more active at getting in and photographing them: if Phil or Katrina got to a character before I did, I tended to leave them to it. There was a wonderful Miss Havisham, for instance, with spiders in her veil: but because Phil and Katrina spent some time photographing her, I didn't want to bother her myself. Next time I shall! Something that was extremely helpful was shooting the D700 in ISO-unlimited fashion (this is Britain in December, after all, where the light rarely gets better than murky). I set the camera on manual with auto-ISO and a shutter speed of 1/250, and just changed aperture for what the picture needed. The liberating thing about the D700 is that you can simply forget about the ISO for the most part and just choose shutter speed and aperture according to what the picture needs. (Then again, the size of the D700-105 combination, its weight and the loud clunk of its shutter are not so liberating….)

Anyhow, I'm looking forward to going back another time. If you've not been, as long as you do not have a fear of being tightly hemmed in in a vast crowd, it is a great day out. 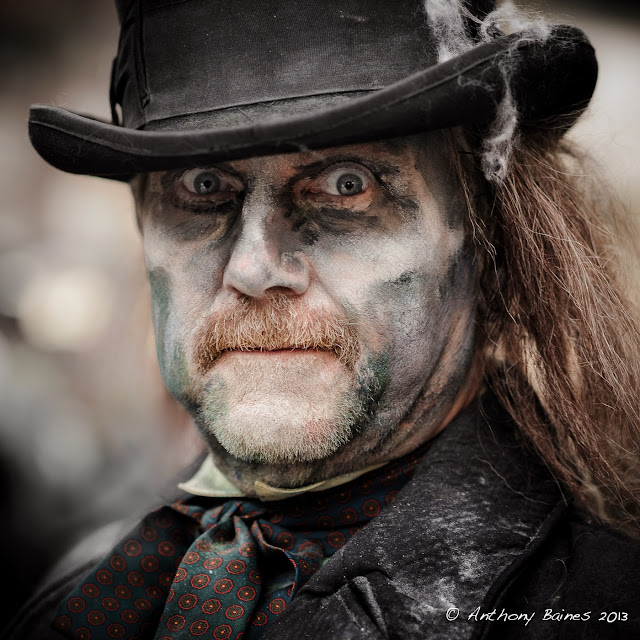 **UPDATE 13 December 2013. Victoria Sparks from Great Kentspectations got back to me after reading my comment above that I didn't see where the Steampunks fit into the Dickens universe. Here is what she said. "We see steampunk as a branch from the Dickensian/ Victorian culture, most of our characters and looks are based on Victorian Science fiction (H G Wells, Jules Verne) and also alternative Victorian history (who's to say some of Dickens unfinished pieces didn't include characters like us :P ). Our main goal is to have fun and bring something different to big events like this, it is our 4th time at the Dickens festival and our popularity is growing within the public and the re-enactors groups too, some gave us the name "the new Victorians" which we thought was lovely." Thanks so much, Victoria - much appreciated, and I'm looking forward to meeting you again the future.
Posted by Anthony at 19:23